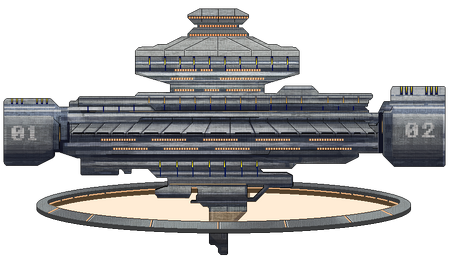 The Starbase can be constructed for 1,000,000 Minerals

. The Starbase is the soul of the fleet, building a Starbase is mainly optional but is certainly a unique break from the usual play.

The benefits that it offers to fleet members are insignificant but helpful. When attacked, the Starbase will launch explosive projectiles at the enemy ship every 20 seconds that inflicts .3 damage to the enemy ship hp directly, similar to Penetrator Missiles. This cannot be dodged and wil slowly wittle down the enemy on its own. If you build the Printer in the Starbase you can collect free Starbux

Fleets that have a Starbase and are in the top-100 fleet list can be raided for supplies, these raided supplies go directly back to your Starbase. A succesful attack on a Starbase scores you a 24-hour cooldown, an unsuccessful attack scores you an 8-hour cooldown in which you cannot attack any more starbases till then. The Starbase can be armed with defences to help fend off any opposing raiders. The "Starbase-unique" weapon rooms are the primary defence and the weapons can be manned with donated crew from your fleet.

To find a Starbase to raid, enter the top-100 fleet list or you can search a fleet up in the search console located in the Fleet Council. If the fleet has a Starbase it will show an atack timer or a raid option. You cannot attack a Starbase that has a timer. Raiding a Starbase voids your PvP Immunity but rewards you with exp based on your trophies, your league reward and a portion of Starbase Supplies

that is put into your Starbase.

There are 4 things that can be donated to the Starbase. You can donate gas/mineral crates that is converted into Supplies

for the Starbase, donate Starbux

that the Starbase can use to speed up builds and Starbase Researches, Donate Modules for room defense and Crew that can be borrowed by fleet members via Fleet Council or put into the Starbase.

When donating Crew, Crates etc, it will automatically appear in chat (See image 2). Along with that, any spending of Starbux on the Starbase will also appear in chat.

The extensions are unlocked by researching Starbase Hull Expansion, extended versions have a special bit of extra space that can only be taken up by Resource Rooms. The trade off is that you have one less ship health compared to non-extended a Starbase. You can simply go to the Shipyard and buy the extension for 5K Starbux